A LIFE ON OUR PLANET. A REFLECTION ON PASTORALISM, DEVELOPMENT AND CLIMATE CHANGE 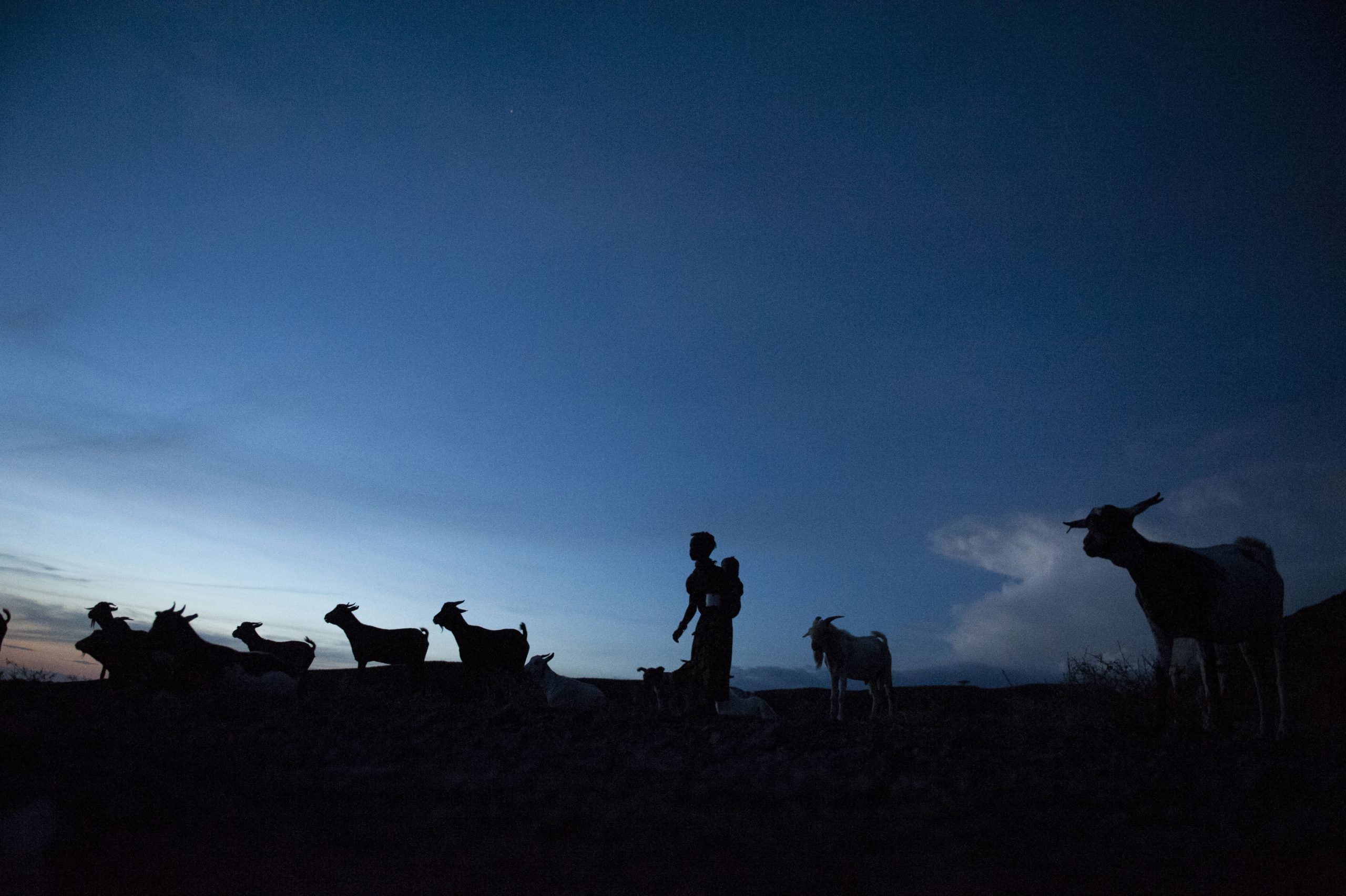 Last September (2020), David Attenborough: A Life on Our Planet was premiered across the globe. Described as a personal ‘witness statement’, the film is the latest call by the then-93-year-old British naturalist to reverse our impact on global climate and biodiversity.

Breathtaking images from a lifetime of documentary making flow on the screen, but this is no ordinary nature documentary. Once stripped down to the bone, the message is simple and terrible. Life on Earth has seen five mass-extinction events in the last four billion years, always triggered by an accumulation of atmospheric carbon and consequent increase in the average global temperature. We are now looking at the sixth one right in the eyes, just a few human generations ahead of us. In this case though, it is not a catastrophe built by a million years of volcanic activity, but by less than 200 years of fossil-fuel-based economic acceleration. Today there is nothing to stop us unless we stop ourselves. A fatal disconnect between the global economy and the natural environment is sending biodiversity into a decline, turning the planet into a place where we cannot live. ‘This is not about saving our planet’ – concludes Attenborough with an unexpected deviation from the conservationist tradition – ‘The truth is, with or without us, the natural world will rebuild … This is about saving ourselves’. The narrative refers to an undescribed ‘humanity’ but the images on screen, the pin on the fossil-fuel economy and the 200-year time frame, leave little doubt as to what is behind the making of the sixth mass extinction.

The evidence presented in the film puts into perspective the ongoing debate on the alleged ecological inefficiency of ‘traditional’ food production systems such as pastoralism and most family farming. Outside the field of vision of pastoral development, debating stocking rates and green-house-gas emission from the enteric fermentation of livestock feeding on pasture, ecological impact of epochal relevance unfolds. The world’s rainforests halved in little over half a century. Summer ice in the Arctic reduced by forty per cent in the last forty years. Freshwater life reduced by eighty per cent ‘by damming, polluting, and over-extracting rivers and lakes’. Some thirty per cent of fish stocks overfished to critical levels in less than seventy years of industrial fishing. Discussing the ecological inefficiency of pastoralism in relation to climate change — even if, of course, there is always room for improvement — is like discussing a dripping pipe in a cabin while opening gashes in the hull of the ship.

But there is also another dimension in which Attenborough’s film bears relevance to the current debate on pastoralism. The film emphasises the relative stability of the Holocene, the last 10,000 years in the life of the planet, during which the average global temperature never wavered up or down by more than one degree Celsius. This relative stability in the average global temperature is described as due to the continuous making of biodiversity: nature’s inherent variability. Following the last mass extinction, which wiped out 75 per cent of species on the planet, it took life 65 million years of reconstruction until – says Attenborough – ‘the biodiversity of the Holocene helped to bring stability … To restore stability to our planet we must restore its biodiversity. The very thing that we’ve removed.’

Specialists on pastoralists and the drylands might recognise a pattern here: a relative stability resting on variability. Efforts to eliminate variability can disrupt the relative stability. Think of Walker et al. (1981) warning that ‘comparison of the dynamics of various savannah and other natural systems leads to a conclusion that the resilience of the systems decreases as their stability (usually induced) increases’. Or of Behnke and Scoones (1993) describing pastoralists’ herd management as ‘an emphasis on exploiting environmental heterogeneity rather than attempting to manipulate the environment to maximise stability and uniformity’.

One of the examples used by Attenborough in this regard is about replacing biodiversity with monocultures. In the case of pastoralism, the same approach reduces the variability in the processes of production: replacing mobility with sedentarisation, local domestic animal diversity with uniform exotic breeds, flexible communal tenure with individual exclusive property rights…

For a long time, the variability of the natural environment has been represented as a constraint to agriculture and development. Efforts within this tradition have sought to ‘externalise’ variability, shielding production from the vagaries of nature. At the origins of animal production as a scientific discipline, during the industrial revolution in mid-nineteenth-century Europe, the crucial novelty was the project of ‘emancipation’ of animal husbandry from the natural environment (Porcher 2017). This conceptual framework, designed to keep the natural environment out of sight, has been the default blueprint for the analysis and representation of pastoral systems in development (FAO in press). The legacy of understanding animal production as hinged on the emancipation from nature continues to translate even today into an understanding of pastoral development as emancipation from pastoralism (development out of pastoralism).[1]

Today, with little room to manoeuvre in order to keep global warming within a 1.5ºC increase — that is already fifty per cent above the average of the last 10,000 years — we badly need ways of saving both agriculture and the natural environment. Could making use of variability rather than fighting it be part of the solution? Pastoral systems specialise to do exactly that: work with nature’s variability rather than against it (Kaufmann 2007; Krätli 2008; IIED 2015). They don’t need to isolate from the natural environment. On the contrary, they are equipped to operate with the variability of nature and seize the opportunities it harbours; above all, its valuable if largely unpredictable concentrations of potential inputs ‘hidden’ inside variable patterns and modest averages. For food systems specialised to work with nature, variability is not an obstacle but an asset. The productivity of a pastoral herd is increased because of variability in the ecosystems and the animals’ and the herders’ active engagement with it.

All livestock production will eventually have to learn to work with the natural environment rather than constructing it as an outer space for externalities. Innovative approaches inspired by agroecological principles, like holistic management and regenerative grazing, effectively move ‘modern’ animal husbandry closer to pastoralism, building on the same logic of biomimicry and working with the ecosystem. Distant observers longing for modernisation continue to see pastoral systems as belonging to the past. But as years go by those visions of modernisation are themselves more and more outdated.  Pastoralists, on the other hand, seem more and more already in the future.

This special section builds on David Attenborough’s ‘witness statement’ as an entry point for a reflection on the debate about pastoralism, development and the environment. Scholars of pastoralism from the editorial board of Nomadic Peoples and a few others were invited to watch the film and send a comment.

The exercise remains open. Contributions (500 to 1,000 words) will be published on the website of the Commission on Nomadic Peoples. Anybody interested in taking part is invited to get in touch with the journal or directly with the Commission.

[1] ‘Development out of pastoralism’ is explained in Krätli (2019). In discussing the theory of change for new projects, recent IFAD guidelines for a holistic approach to pastoral development warn that ‘Encouraging people to move out of pastoralism may lead to greater poverty’ (2018: 25).