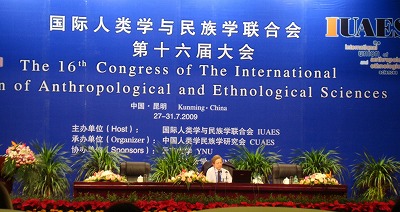 The 16th Congress of the International Union of Anthropological and Ethnological Sciences (IUAES) was successfully organized and held by the China Union of Anthropological and Ethnological Sciences (CUAES) from July 27th to 31st 2009, supported by two institutions in Beijing: Institute of Ethnology and Anthropology, Chinese Academy of Social Sciences and Central Minzu University of China, and hosted by two universities in Kunming: Yunnan University an Minzu University of Yunnan. Five keynote speeches and 14 distinguished lectures were delivered by world renowned scholars at the congress. About 5,000 scholars and students from 116 countries and regions attended the Congress.

The exciting programs included 239 academic sessions/panels with more than 5000 paper abstracts, 6 cultural exhibitions, 5 Study Tours and 23 films, exploring the theme of "Humanity, Development, Cultural diversity". It was the most attended congress in the history of IUAES.

Besides participants’ papers abstracts, CD-ROMs were included in the materials to the participants.  The CD-ROM included the research results from the three projects conducted by a number of experts and scholars on ethnic studies in China for the event: "China's Ethnic Affairs Administration, "Culture of Chinese Ethnic Minorities" and "Historical Foundation and Current Development of Anthropology and Ethnology in China".

Scholars all over the world shared their latest academic research, and expressed that the Congress was truly an international academic conference with distinctive characteristics, rich content and substantial impact on the discipline. During the congress, colorful Chinese culture is admired by foreign scholars.

The congress has successfully attracted extensive attention from the national mainstream media; the organizing committee held daily press conference during the Congress, updating the progress of the conference. Mainstream media in China reported the full program of the Congress timely. More than 60,000 printed and website posted articles reported the opening and the closing ceremonies, keynote speeches, distinguished lectures, academic sessions/panels, film exhibition, and cultural exhibition in details. Many domestic print media and websites did follow-up reports of the Congress as well.

The success of the Congress gives credits to the Kunming Declaration drafted by the congress’s organizing committee and adopted by IUAES members on July 30th, 2009. It is also grateful to the active participation of the Chinese scholars who organized the sessions and presented their research findings. The Congress was indeed a significant event for the host country of China. It was the first time China made her voice well heard by the international anthropological and ethnological circles.

Now the report will introduce the Congress results in the following sections:

Nearly 5,000 experts, scholars and students from over 116 countries and regions of the world attended the Congress. They included a good number of renowned scholars in their own fields, international leading scholars. Five top scholars made keynote speeches in the plenary session in the opening ceremony and 14 outstanding scholars delivered Distinguished Lectures to the participants. Their presentations represented the most cutting-edge research in Anthropology. Their speeches are now collected and published in Keynotes in Anthropology, which is one ofthe 32 published volumes of the Congress publication series.

Academic Sessions/Panels
Since the call for papers made in August 2006, the Academic office’s organizing committee received 456 applications for session/panel and round table discussion from scholars all over the world. The Directors of the Academic Working Committee held meetings regularly, screened and approved altogether 340 sessions/panels and 7 round table discussions. These sessions/panels were finally combined into 239 sessions/panels according to different themes. The 239 panels explored issues on cultural diversity, AIDS, child trafficking, global aging, ethnicity, urban development, religions and linguistic evolution, etc. It covers 36 sub-disciplines or sub-research field as the following:

Academic exchange and showcase of the discipline of Anthropology and Ethnology in this Congress indicate the following distinct developments.  First, it paid more attention to the applied value of anthropology, emphasizing the application of anthropological knowledge to answering everyday life challenges, such as AIDS, immigration, drug addiction, medical science, urban and other applied research of the practical issues. Another example is the sessions on ethnic economic development issues and ethnic cultural preservation issues that bear tremendous policy implications for policy-makers. Second, cross-disciplinary research is a very significant feature in this Congress. An excellent cross-disciplinary study between anthropology and different disciplines can be observed in cooperation studies. Other examples can be found in cross-disciplinary studies in anthropology with political science, linguistics, history, environmental science, education, business management, and so on. Third, some specialized topics and issues within anthropology are emerging. These topics are so prominent that they become specialized fields in anthropology research and other topics become sub-disciplines of anthropology. These emerging topics are: gender studies, studies on aging and the aged, studies on children and youth, research on indigenous knowledge, migration research, etc. Fourth, scholars all over the world show tremendous interest in studying China and Asia. Fifth, a number of sessions/panels co-organized by both Chinese and foreign scholars show strong collaboration between international and Chinese anthropologist & ethnologists.

During the 16th Congress of the International Union of Anthropological and Ethnological Sciences, 6 exhibitions were held in Yunnan University. It attracted much attention.

The 6 exhibitions were: "Colorful China: China 's Minorities ", "Native Cultures in the World", "Book Fair on International Anthropological and Ethnological Sciences ", "Poster Sessions: Exhibition of Institutions' and Individuals' research", "Retrospective Exhibition of the 60th Anniversary of the IUAES" and "Retrospective Exhibition on the 100-year Development of Anthropological and Ethnological Sciences in China ". The exhibitions were hosted by the organizing committee of the International Union of Anthropological and Ethnological Science and collaborated by China National Museum and Yunnan University. The grant opening ceremony of the exhibition celebrated the 60th anniversary of the IUAES in Kunming. These lively exhibitions showed the mien of ethnic minorities in China and showcased the latest Chinese anthropology and ethnology research results with rich material, photographs and detailed data.

6 anthropology films were awarded for their excellence at the 16th IUAES Congress. The other 17 films received the nomination award at the closing ceremony in the afternoon of July 31st, 2009.

The film section organizers of the Congress collected films from all over the world. A total of 362 films were collected before February, 2009. The quantity of films collected created a record of the film festival in the Congress.

The Executive Committee of the Film section developed rigorous screening procedure and standard for the anthropological films and videos. Both domestic experts and overseas experts in related fields made two rounds of selection. 23 films were nominated. These films were showed at Yunnan University Sciences Museum during the Congress.

The 6 excellent films awarded in this Film Festival are "The Dilemma of Duka", "Los Muertos on Rule and Law of Koriam", "The Revenge of Hanxin ", "Rules Left By Ancestors", "Family "and "People Lived In Golden Triangle".

Study Tours
Five study tours to the ethnic minority communities near Kunming attracted many participants of the Congress: 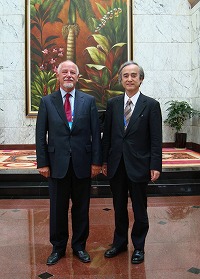 New Leadership of IUAES
During the Congress, IUAES conducted a general election. Prof. Peter J M Nas was elected as the new President of IUAES and Prof. Junji Koizumi was elected as the Secretary-General of IUAES. A new executive committee of IUAES was also elected.

During the Congress, Anthropology Now ( English version and Chinese version), edited by Peter Nas and Zhang Jijiao, were published specially for the event. It is a collection of papers on history of the IUAES, its development process and achievements, and you can also find papers written by chairs of the IUAES scientific commissions on the latest research findings and trends.

After the Congress, China Union of Anthropological and Ethnological Sciences (CUAES) has published collections of papers. Entitled Anthropology and Ethnology Today Series is a-32-volume paper series selected from the 16th World Congress of International Union of Anthropological and Ethnological Sciences (IUAES). The editing and publishing of the book series are organized by CUAES. The official ceremony of the book launch with a round-table discussion was held in Beijing on February 23, 2012.

Directory and purchasing contactor of the Book Series (altogether 32 volumes)

20 English books are as follows:

12 Chinese books are as follows：