The conference theme was inclusively designed to maximise participation from each of the sponsoring organizations, but it nevertheless resulted in considerable coherence overall, highlighting the intersecting themes of epistemological (knowledge) and ethical (value) concerns. The critical examination and re-evaluation of anthropology’s basic categories of understanding and engagement provided a sustained focus for the two keynote speakers, Jean Comaroff (South Africa/USA) and Jim Ferguson (USA), and the three plenary speakers, Shiv Visvanathan (India), Ann Salmond (New Zealand), and Alberto Gomes (Australia), as their addresses dealt with international debate about the epistemology and ethics of anthropology as they have shaped recent developments within the discipline, and as they have informed popular discourses about the globalizing world.

These speakers made invaluable contributions to bringing the conference to a common focus through questioning anthropology’s role in poverty alleviation, constructions and understandings of the global North/South divide, the ethical dimensions of the predominantly Euro-American domination of the discipline globally, anthropologists’ engagement with Indigenous populations as their role within nation-states and in the global world order changes, the popularization of anthropology, and the problematic use of our signature concepts by other disciplines. Several panels, particularly those organised by members of the Australian Anthropological Society, addressed the conference theme of deconstructing dichotomies and unpacking unities deployed in anthropological theory.

The aim of the conference was to create a dialogue that was as inclusive and as interdisciplinary as possible among scholars from the Global North and South. The panels indeed reflected broad international engagement with very strong contributions from scholars from India particularly, but also from Bangladesh, Brazil, Indonesia, Japan and Russia, along with numerous delegates from Australia, New Zealand, the USA, and European nations. Despite an ash cloud in the weeks preceding the conference that grounded airlines on some days, and a domestic airline being banned from flying at the time of the conference, the numbers of registrants exceeded (slightly) our expected target of 500.  We certainly appreciated this vigorous turn-out at the conference despite our budgetary constraints limiting the travel assistance we could provide, financial turmoil in the home countries of many delegates, and the imposing exchange rate of the Australian dollar.

In addition to this far-reaching international engagement, the conference created a larger international stage for antipodean anthropology, which has had a significant historical role in shaping the history of the discipline. As well as facilitating networks for early career researchers, it also showcased the work of international and Australian postgraduate students. Bringing together local and global anthropological societies in this way provided an opportunity to attract attention to, and disseminate knowledge about, anthropological thought and practice. We were also very pleased to have active engagement by applied as well as academic anthropologists, along with registrants and speakers from numerous disciplines beyond anthropology.

Although no (peer-reviewed) proceedings will be published for this conference, a number of the keynote and plenary addresses, as well as articles from a number of panels, are being published in the journal Anthropological Forum. Those that have already appeared include a version of Jean Comaroff’s keynote address (as revised in association with her co-author John L. Comaroff), ‘Theory from the South: Or, how Euro-America is Evolving Toward Africa’ (vol. 22, no. 2 [2012])’ and Alberto Gomes’s plenary address, revised as ‘Anthropology and the Politics of Indigeneity’ (vol. 23, no. 1 [2013]). Three of the papers from the panel ‘Epistemic Imperialism and the Anthropology of Mischief: Techno-science, Expert Knowledge and Unruly Subjects’ were also published in volume 22, no. 2 [2012] of Anthropological Forum: Bernard Perley’s ‘Zombie Linguistics: Experts, Endangered Languages, and the Curse of Undead Voices’; Marama Muru-Lanning’s ‘Maori Research Collaborations, Matauranga Maori Science and the Appropriation of Water in New Zealand’; and Tracey Heatherington’s ,‘Remodeling the Fortress of Conservation? Living Landscapes and the New Technologies of Environmental Governance’. Later in 2013 Gustavo Lins Ribeiro’s paper, originally written as a plenary address, ‘Global Flows of Development Models’, and Abhijit Guha’s article, ‘Campus Anthropology: A Case Study from West Bengal, India’  revised from a presentation in the panel ‘The Accidental Anthropologist’,  will appear in volume 22, no. 3, while in 2014 a selection of the papers from the panel ‘Custom and Social Change – Rethinking Autonomy, Revitalisation and Transformation: Papers in Honour of Emeritus Professor Robert Tonkinson’ will appear in a special Festschrift issue of Anthropological Forum. 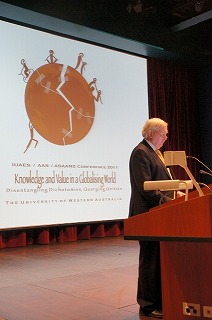