REPORT ON 2012 INTER-CONGRESS OF INTERNATIONAL UNION OF ANTHROPOLOGICAL AND ETHNOLOGICAL SCIENCES (IUAES) ON CHILDREN AND YOUTH IN A CHANGING WORLD NOVEMBER 26–30, 2012 AT KIIT UNIVERSITY, BHUBANESWAR

Organized jointly by: IUAES COMMISSION ON ANTHROPOLOGY OF CHILDREN, YOUTH AND CHILDHOOD AND KISS AND KIIT UNIVERSITY

The 2012 Inter-Congress of International Union of Anthropological and Ethnological Sciences (IUAES) on "Children and Youth in a Changing World" was held at KIIT University, Bhubaneswar during November 26-30, 2012 It was jointly organized by the IUAES Commission on Anthropology of Children, Youth and Childhood and Kalinga Institute of Social Sciences, KIIT University. 300 participants from 47 different countries attended the inter-congress.

The Commission on Anthropology of Children, Youth and Childhood was proposed at the International Union of Anthropological and Ethnological Sciences at a meeting of the Executive Committee at the Beijing Inter-Congress in July 2000. The Commission was officially recognized and its work ratified by the Permanent Council of the IUAES at the Göttingen Inter-Congress on 19 July 2001.

The IUAES Commission on Anthropology of Children, Youth and Childhood is a new body that has come together to engender and promote a number of guiding ideals. One of our initial and most important aims and intentions is to encourage research about children in which children are themselves active participants as opposed to being just objects of study as they were most often in the past. If, that is to say, they were studied at all. Close scrutiny of numerous well known anthropological and sociological studies over several decades would reveal the notable absence of children. However, in recent years a growing number of researchers has either studied childhood or included children in the broader picture of society. Youth has generally fared better, although often represented by studies of youth movements, youth culture and complementary topics such as the influence of music, fashion, drugs and so on. We are fortunate in starting at a time when a small but growing body of expertise is proving the value of participatory work with children and youth, thus carrying over skills we have acquired as ethnographers to the greater good of children.

The anthropology of childhood is slowly gaining recognition as an important field of specialization, as children are increasingly seen as social actors in their own right rather than passive recipients of adult instruction and influence. Studies in the anthropology of childhood have succeeded in highlighting the agency of children, as they explore and act upon the conditions of the "adult" world in which they live and of which they have direct experience. Long treated as of minor importance within anthropology, the study of childhood has blossomed in the last decade. Scholars interested in human evolution and development, acknowledge the importance of studying the role of culture and biology in shaping the life course. There is renewed interest in understanding culturally marked transitions and stages in children's development. From analyses of the mothering of the young to the study of rites of passage, both traditional and modern anthropologists are re-examining and overturning many widely held assumptions about human development.

In considering what social agency means to the children and young people themselves, it is important to remember the notion of children as social actors shaping their own circumstances, as opposed to being submissive recipients of the social processes in which they find themselves. Childhood is a cultural construction. Children make meaning for themselves by bringing their own unique form of agency into being. The question of agency cannot even begin to be addressed without due consideration of what social agency means for children and youth themselves. How children come to 'make sense' of kin reckoning, and come to experience forms of "family" socially, including those they bring into being for themselves. It is important to analyse the ways in which children themselves explore and experience their everyday lives in our fast changing society. What are the impacts that the changing face of childhood has for children? People often muse why childhood today seems different than it was when they were young. An important task is an understanding of how the globalised conditions under which children grow up affect 'local' childhoods. The traditional family, which provided emotional security and protection to children, has given way to new forms of family, where home becomes primarily a meeting place for parents and children, a place to take a rest from their busy lives. Further modern technologies have significantly altered children's lifestyles. TV culture has dominated the socialisation practices of modern societies replacing much of the influence that the family and school used to have. Children's own emotional needs tend to be overlooked when they are drawn prematurely into a troubled adult's world. In understanding the changing nature of childhood, we need to see it in relationship to adulthood. Today, the typical modern child in a modern nuclear family has almost disappeared as the majority of children find themselves with dual-career parents. The once primary value of family togetherness gave way to the value of autonomy where the needs of the individual members are considered most important, and individual competence in both children and parents is valued above all. Scholars interested in human evolution and development, now acknowledge the importance of studying the role of culture and biology in shaping the life course as an important determinant. There is renewed interest in understanding culturally marked transitions and stages in children's development. From analyses of the nurturing of the young to the study of rites of passage, both traditional and modern anthropologists are re-examining and overturning many widely held assumptions about human development.

The Inter-Congress was not confined to anthropology. Rather it provided a dynamic platform to persons from a variety of backgrounds such as anthropologists, sociologists, economists, demographers, civil society, national and international bilateral agencies, policy makers and planners to have dialogues and deliberations on children and youth issues in a changing socio-economic and legal order.

Dr. Samant rightly pointed out that "no other place in India is more suitable than KISS, KIIT University for the 2012 inter congress on the theme "Children and Youth in the Changing World" as more than 16,500 tribal students from KG to PG are getting free education, food and accommodation at KISS/KIIT University. Professor Behera introduced the theme of the conference to the delegates. His Excellency Governor of Odisha in his speech expressed his concern for parental expectation on children and the free access of children to TV and internet.

The business meeting of the IUAES Commission of Children, Youth and Childhood was conducted in the evening of the 2nd day of the inter congress. Professor D. K. Behera, Chair, IUAES Commission on Children, Youth and Childhood chaired the session. The meeting was attended by the members of the Executive Committee of IUAES. A total number of 48 members attended the meeting. The new office bearers of the Commission were elected:

Professor Deepak Kumar Behera, Chairperson of the commission
Professor Spyros Spyrou, Centre for the Study of Childhood and Adolescence and European University Cyprus (Executive Secretary of the Commission)
Members of Organising Committee

Professor Junji Koizumi, (Secretary-General, IUAES) and Professor Soheila Shahshahani spoke about IUAES and its different commissions. They described the modalities for setting a new commission and becoming a member of the commission.

All the participants of the inter congress visited to Kalinga Institute of Social Sciences (KISS) – the largest residential educational institution for tribal children on the evening of the first day with great interest and enthusiasm. A cultural programme was staged by the children of KISS for the entertainment of the guests. A field trip was organized on the 3rd day of the conference where the participants visited different cultural heritage and tourist places in and around Bhubaneswar and Khurdha. The delegates from the foreign countries were fascinated by the rich cultural heritage and beautiful tourist places of Odisha. The guests were entertained via cultural programme in each evening after the daylong academic sessions and plenary lecturers.

The valedictory session was held in the seminar hall I of the campus 6 of KIIT University in the afternoon of 30th November 2012. Professor Luis Alberto Vargas, Past-president, IUAES, National Autonomous University, Mexico was the chief guest at the valedictory function. The three plenary speakers from India were felicitated by the Vice-Chancellor of KIIT University. Prof. Junji Koujmi thanked the conveners, other members of the organising committee and especially Dr. A Samanta for his support for making the inter congress a successful one. Professor P. P. Mathur unfolded that the mass presence of participants in the valedictory ceremony shows the success of the inter congress. Prof. A Kapoor mentioned that the 2012 inter congress beginning of new history as for the first time the anthropologists were felicitated in such a mega academic event. Professor S. N. Ratha stated that the 2012 inter congress is unique and different because it is a conglomeration of academicians and researchers of all ages starting from the 20 years old fresh students continuing post graduation to 77 years old man like him and also it is a gathering of teachers, their students and grand students in a true sense. Many participants shared their experiences and compliments. Finally Professor Behera and Professor Dash, the conveners of the inter congress conveyed their heartfelt thanks to everyone present starting from the members of the organizing committee to the participants from India and aboard for their active participation, deliberations and making the inter congress a successful one. Professor Behera mentioned that this inter congress is a milestone in the anthropological history of KIIT University and it is not the end but a new beginning…

The following parallel panels were held during the Inter-congress: 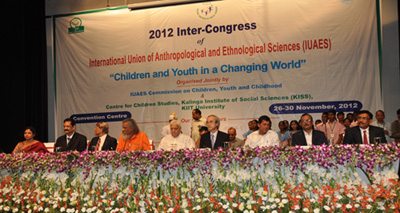