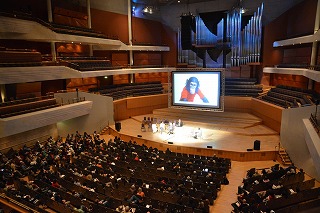 The 17th World Congress of the International Union of Anthropological and Ethnological Sciences, which had the overall theme Evolving Humanity, Emerging Worlds, is now over. The congress was hosted by the University of Manchester with the support of Manchester City Council. This was the first world congress to be held in Britain since the initial meeting of the International Congress of Anthropological and Ethnological Sciences in London in 1934. The Congress Agenda was prepared by a UK Organizing Committee which includes anthropologists working in all sub-fields of the discipline. We are proud to have organized what we hope was a truly memorable event. In addition to the plenaries, 1283 papers were presented in 211 parallel session panels by 1260 delegates representing 65 countries.

The distinguished lectures and other plenary sessions were recorded on video and are available via a Global Anthropology YouTube channel and on the Plenaries page.

Electronic versions of the conference programme/book can be downloaded as either as a PDF or epub (an open standard, which can be read on mobile phones as well as tablets/laptops).

The Brazilian Anthropology Association (ABA) will host the next world congress in July, 2018, in the beautiful city of Florianópolis, in the southern state of Santa Catarina.

The conference convenor has written a detailed final report which supplements the information in the rest of this website.

Thanks to the generosity of ASA, we were able to offer support to UK-based postgraduate student paper presents. Additional funds received from Manchester University's Department of Social Anthropology, School of Social Sciences and Faculty of Humanities enabled us to offer additional support to some delegates on low incomes who had received partial support from other sources. We are grateful to all these sponsors and to the Wenner-Gren Foundation for Anthropological Research, which provided the principal funding to support the attendance of delegates from low-income countries. The overall cost of the conference has also been reduced by a generous subvention from Manchester City Council and a grant from the University of Manchester's Hallsworth Conference fund, which has sponsored our second plenary debate. We are also grateful to the Royal Anthropological Institute for providing us with the Huxley Lecture, and to ASA again for supporting the congress with the Firth Lecture.